Do you know that feeling, when you meet someone really unique? When your DNA is forever changed after just spending some time and drinking coffee with that person, discussing the eternal questions of life?
The reason I’ve got an opportunity to meet and talk to him in person is the opening of his personal exhibition Pure Arctic in The Lumiere Brothers Centre for Photography in Moscow which opened 21st of September and will remain open to visitors until 9th of January 2018. A collection of 50 large-scale works taken over the last ten years in expeditions to the polar regions of Norway, Canada, USA, Greenland, the Arctic Ocean and the Antarctic Peninsula is waiting for you to be seen.
And I assure you: it’ll be worth your time.

This time we met in the cafe of the luxurious Balchug Hotel in which he was staying, right across the Red Square. It was a cool and serene Saturday, slightly afternoon, so I haven’t had the time to drink my morning coffee yet. When I was inside, I saw him sitting at the table, talking to his guests. He noticed me and greeted me with a small nod, and I realized, that they needed a little more time. I’ve sat at the table nearby and ordered americano. After some time his guests left, and we finally greeted each other properly. I’ve at his table. We were the only people at the cafe, except for barmaid and a waiter, so I had an apprehension, that we might come up with some interesting topics, seeing that the atmosphere was favourable for frankness.

— So, what are you drinking?
— Tea.
— Oh, with milk? Classic.
— (Sebastian grins)
— Sebastian. I wanted to thank you for what you’re doing, and for meeting me. I was thinking to do it a little bit less formal if you don’t mind.
— Yeah, sure.
— And for the first question today I’m gonna honour my mother’s will to ask you one specific question.
— Okay. Are you recording?
— Yeah. Is it alright?
— Yes, of course, it’s perfectly fine, but is it on?
— Yep.
— Oh, okay, jolly good.
— So. My mother’s asking this: when you think about your parents, your mother and father, what are the most inspirational traits of their characters? What is so very unique and interesting about them for you, when you think about them as individuals, as persons?
— Yeah, that’s easy enough for me. With my mother it’s compassion, you know… And with my father, it’s ethical discipline, and a work ethic as well.
— He’s a conductor…
— A conductor at the orchestra, uh-huh.
— So, did you spend a lot of time with him when you were a kid?
— Actually, no. Not as much as I would’ve liked to. (chuckles) But you know, we made up for it in other ways, but my father was very busy and also my parents separated when I was a child, so I grew up with my mother for the most part, but I mean, you know, I saw my dad as well of course, and now I’m very close to my father.
— What did your mother do?
— She was in advertising.
— So that’s how you got in?
— That’s correct, there was an influence, she was an advertising executive, so…
— Did you have a pet when you were a child? A dog or a cat?
— Oh yeah, absolutely, yeah, always, we had pets.
— Is that why you grew up being so well developed empathetically?
— That’s true. I think that’s a good way to associate it, yeah, absolutely, we had a dog, we had cats, I had a guinea-pigs and rabbits, birds, goldfishes, you know, we had a farm.
— Did that influence somehow what you’re doing now?
— I think so. You know, that’s a very good question, because I have two little girls, a one-year-old and a three-year-old.
— Yeah, I saw the pictures, they are angels.
— Aww, aren’t they. And we have a dog, I have my dog that I’ve had for fourteen years, she’s in a very good shape.
— Fourteen? That’s great!
— Yeah. And you know, my kids love the dogs, they have a complete love affair with the dog. This is one of them.

Sebastian shows me a couple of pictures of his wonderful child and the dog, sleeping side by side.

— And the other one is exactly the same way
— They look like sisters.
— They are exactly that. And that’s a good point that you’re making. I consider my dog to be my child
— Member of a family.
— Absolutely. Equal in most ways. My dog’s life is as important for me as my children’s lives. I can’t separate it, the love I have for her is… she’s been my companion for fourteen years, and before that, I had another one for sixteen years, and you know…
The subject was touching. And being able to heartily talk to someone like that is worth a lot. And I knew how he felt. I had two dogs for fifteen and half years myself. That is some life companionship for you.
— Do you sometimes take them with you in travels?
— Well, no. You know, dogs have to be physically engineered for those environments.
— Right, but I mean like, maybe, in more casual ones, like to Mexico or France or something.
— Oh-yeah-yeah, they’ve travelled. They are very well travelled. They have a lot of flights.
— Another question about your father. Do you keep in touch with him?
— Very much so, yes.
— Do you visit his concerts?
— Yes, I do.
— Wow. By the way, you ever heard about Amon Tobin?
— Of course. I love house music and electronic. I love all kinds of music, but I’m a big house music fan. I deejayed for a while, and you know, yeah, Amon Tobin is great.

Bingo! Thing is, I consider Amon Tobin amongst greatest and most innovative musicians and artist of our time, and he influenced me a lot. So refreshing to talk to somebody who gets you in that regard or, for that matter, even knows who Amon Tobin actually is.

That was another full circle.

— So sorry. Okay, Adrian, thank you so much, man, take care, and it was great to see you again.
— Thank you! Oh, and there was something else I wanted to ask you. What is your impression of your gallery at Lumiere brothers?
— It’s first class. The gold standard, the best.
— Really?
— Yeah. These guys did a great job, and the work they pulled, what I thought off, you know, was a wonderful show. And they did all the heavy lifting, so I was lucky enough to just show up, basically.
— Thank you. That was important to hear. Farewell, my friend!
— Take care, man!
And so we bid each other farewells. He left. And I still needed to pay for my coffee. The barmaid tried to attract my attention, as I was just approaching the bar.

— I’m sorry, but…
— Yeah, I was just on my way to you. Give me a bill, please. I had americano.
— It’s just that this man was sitting here with a bunch of people all morning, and they’ve been changing a lot, ordering things, and his bill is still open…
— Oh, that is Sebastian. He lives here. Well, for a short time, at least.
(Pause)
— Do you know him?
— No.
— He’s an adventurer. One of the most incredible humans I’ve ever met.
(Pause)
— You’ve been working here a long time?
— Yeah, many years.
— Wow. So this is the place?
— The place will be in a week, in Spain, on a beach…
— Oh well. Adrian.
— Mari.

I think I want one more coffee.
And yes. Later on that evening Sebastian gave a magnificent presentation in The Lumiere Brothers Center for Photography.
And he did meet my mother.

— Until we meet again, Sebastian Copeland, you brilliant bastard. 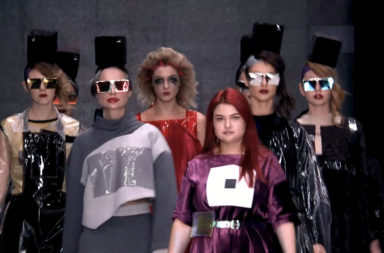